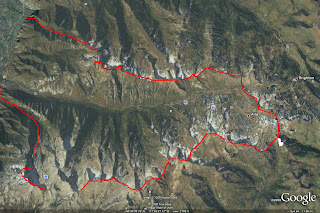 Last August i did the alpine traverse and was completely trashed afterwards i could barley walk and it took me 13 hours. After doing this i thought there was no way i could ever do the whole Horse Shoe Traverse: however, this summer i got really psyched to start training and make this thing happen. I started running the Pfeifferhorn and sections of the traverse a few times a week and mixed in some more casual trail running as well. One day after doing a section of the traverse from the Pfeifferhorn to Lone Peak and down Bells Canyon i sprained my ankle badly. This injury continued to haunt me while i rolled my ankle repeatedly on training runs to the point i thought i would not be able to do the traverse. finally it healed enough and i knew i was ready to give the traverse a shot so i stashed watter on the Pfeifferhorn and Superior and on Monday 9/7 i started at 3am. 10 min. in i got lost in the dark and went bush whacking up a sand slop for 2o min. and ended up having to retrace my steps back to the point i got lost in the first place. i almost threw in the towel right then. The rest of the way up to the SLC twins was easy going with no problems with route finding. the sun began to rise a few peaks after the twins and this was very nice and i was able to pick up the pace a bit with the increased visibility. i felt great after Superior and i took a five min. break to chug some gatorade and refill my bladder. this is where i could start running more because you are on a trail instead of boulder hopping on a ridge this is where i thought the easiest section would be; although, i was wrong. My knees started to become very sore and my hip, which had been an issue for a while was starting to really give me trouble. i struggled and my pace showed as i was slower than i had hoped on this section to hidden peak. once on hidden peak i meet my mother, father, and my friend Miah who where nice enough to support me by coming up and giving me some extra motivation. i had another gatorade, refueled my water, and took some advil for my knees and hip. then i was off and i felt great with the advil working wonders and alleviating all my pain i was able to focus on the running and i was able to move much faster than i had anticipated. The AF Twins went by easily along with Red and White Baldy. I made it to the Pfeifferhorn in 13.5 hours i was stoked. My knees began to become tender again but i was on the home stretch and was able to keep it off my mind. I increased the amount of Gu and Powerbars i was eating to help with my extra fatigued muscles. Once on thunder ridge i saw many mountain goats and in my tired state i found some amusement in yelling at them and they happened to be on the same route i was on going up South Thunder so i had a rabbit to help me keep pace. We actually went up South Thunder and down to the base of Big Horn together before the mountain goat decided (what a sissy) to take the easier route down and right into the upper Bells Bowl. I continued up Big Horn trying not to look up for the reason that this is steep but short so i figured keep my head down and keep on chugging. This seemed to work and i was up on Big Horn and climbing up Lone Peak quickly, which seems to always be a grueling part of the traverse when your legs are worked. Up on Lone Peak in 15.5 hours and my friend Peter and his girlfriend Jules were climbing. Peter was the one who actually got me into this ridge traversing and has made some fast times on section in the past. It was nice to hear a friendly voice after so many hours of seeing no one. Down i went trying to go as quickly as possible. The shoot i had gone down in the past was clear of snow, which sucked because it is easier to glissade down than it is to hike down a bowling alley of loose rocks and sand. I made it down and then began the boulder hopping. This always gets to me and mentally i just get to the point where i am just over it. I found the trail and worked my way down Bells Canyon and back to the road where my dad picked me up and took me home where a few family friends where hanging out at the camp fire. my mom had made some pasta and it tasted so damn good after 17 hours and 48 min. of running and eating Gu and bars. i topped it off with a Sierra Nevada Torpedo and some cake and ice cream my sister made. thank you so much family and friends for all the support and inspiration. i would not know what to do without you all. here is a map from google earth of the ridge. its so beautiful and close so go play on it and do the thing.
Posted by Nik Berry at 11:17 AM